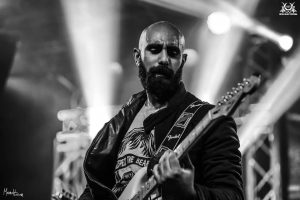 Ehab’s musical journey started at the tender age of 4 years old, taking in his father’s footsteps he followed his undeniable passion which led him to Medic which he co-founded in 2007.
Ehab used to play keyboards since the age of four before he switched his focus to guitar where he found his true passion and has been rocking it since then.
His favorite genres are: Progressive rock, progressive metal, Jazz fusion, & chill-out.
When it comes to music composition, his influences are: Prog Rock/Metal, Funk, Post Rock and Chillout music. Ehab’s influences did help in adding a powerful significant taste in Medic’s music.